LavaCon was delightful as always, and Austin was a great venue for this crowd.

I have embedded the slides from my content strategy presentation. If you’d like to see a version with audio, we’ll be offering this session as a webcast on January 19, 2012. (Free, but registration is required) I’m also working on a white paper version, so stay tuned for that.
Disclaimer: The slides are heavy on graphics and light on text. The event was tightly focused on content strategy—when my session time rolled around on Wednesday, I felt as though I was just repeating what others had said. On the bright side, I worked in a dead camel (which represents what could happen if you choose the wrong tool for a difficult challenge), so I’m pretty sure that I won the Dead Camel Reference challenge.

I attended very few sessions, but I did see most of the closing panel with Alan Porter, Mollye Barrett, Val Swisher, and Michael Boses (Michael is new to Twitter, so drop in and say hi). They all emphasized that technical communicators must do a better job of tying their work product to corporate strategy. Alan Porter had an excellent sound bite: I spent a lot of time in the hallway track, talking to friends, colleagues, clients, and anyone else that happened by. This is why I go to conferences—to see people in person. After all, it’s perfectly possible to attend webcasts or read white papers to get the technical information. But it’s only in private conversations that you hear about the ridiculous demands being made by management, the concern about new management, the business deals that are under discussion, the reality of the merger one year later, and the scoop on what it’s like to use certain bits of software. The language also tends to be more…colorful than in public. (Digression: My seven-year-old was looking a a comic-book-type illustration and wanted to know what “$#@$#@” stood for. Me: “A bad word.” Her: “Like D-U-M-B?”) LavaCon was crammed with social events in addition to the core content. These events may look fluffy, but they play an important part in cementing the relationships among attendees and creating ties that last until the next event. The first LavaCon Stitch-n-Bitch (in the bar, of course) had a good turnout with minimal knitting and a lot of the other thing.

Char James-Tanny and I won the LavaCon heat of SDL’s North American Globalization Challenge. The photo doesn’t do the very cool trophy justice at all. Embarrassingly, in the heat of competition, I actually managed to get the abbreviation for globalization wrong, even though it was in the hashtag for the event (#g11nchallenge)! Oops. Questions ranged from easy to impossible with no clear pattern. The funniest part was the questions that should have gone to a different participant. For instance, Char and I were asked what the smallest continent was. I looked at Australian Kirsty Taylor, sitting in the front row, but she wasn’t giving anything away. So we (okay, I) went with Antarctica, which turned out to be not the best strategy. Bernard Aschwanden nearly jumped out of his chair when another participant was asked for the four official languages of Switzerland. I wanted the Germany round, which of course went to another team. But it was great fun.

On departure, the block of glass (?) showed up as some sort of Possible Instrument of Doom(tm) on the airport security scanners. I did manage to avoid Extra-Special Scanning. And, in case anyone is wondering after my epic tekom travel misadventures, my flights this time were basically uneventful. Although I really could have done without Mr. Loud Talker in the row in front of me explaining to his seatmate why a tax holiday for repatriating Cisco’s profits is just obvious common sense. We need travel behavior policy for self-entitled engineers who think that more decibels equals more compelling arguments. (It was a late-evening flight and I was tired. I fixed the problem with Wagner opera.)

Speaking of music, LavaCon karaoke is becoming a tradition, and it was QUITE entertaining. For all the gruesome details, see Darin McClure‘s Picasa feed. 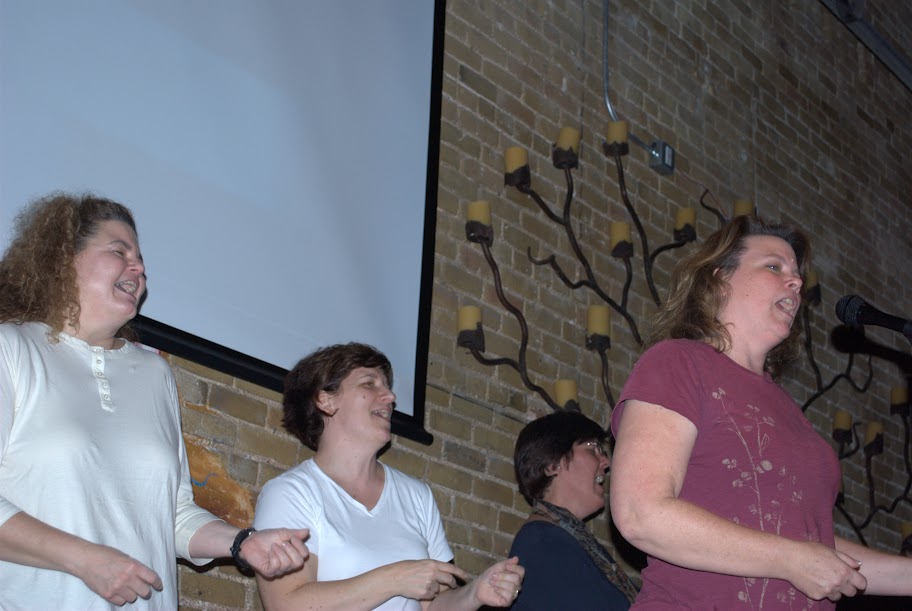 The Twitter backchannel was and remains very active and lots of pictures are being posted (no more links for fear of retribution). Search slideshare with the lavacon tag for presentations.

Many, many thanks to Jack Molisani and his merry band of support staff, who did an excellent job making sure that the event run smoothly. They made it look easy. It isn’t.